This is a product review of the FiiO FH5 Quad Driver Hybrid In-Ear Monitors (IEMs), which are available for sale now on Apos.

This review is posted here in partnership with Soundnews.net. It was originally written and published by Sandu Vitalie of Soundnews.net on Feb. 10, 2019.

FiiO never ceases to amaze me, few months ago I was testing their new flagship IEM: the F9, a few months later their new F9 PRO flagship and now they done it again with the FH5. I would not be shocked if at this very moment they are already tinkering with a new flagship IEM, FiiO is on fire and I like that.

FH5 sets apart from the other IEMs they done in the past, from the moment you unpack them you start to understand they are surely in the big boy category with this one. Unboxing experience was like a much higher priced IEM, I’m glad they are making time into thinking better ways to carefully pack a premium product. 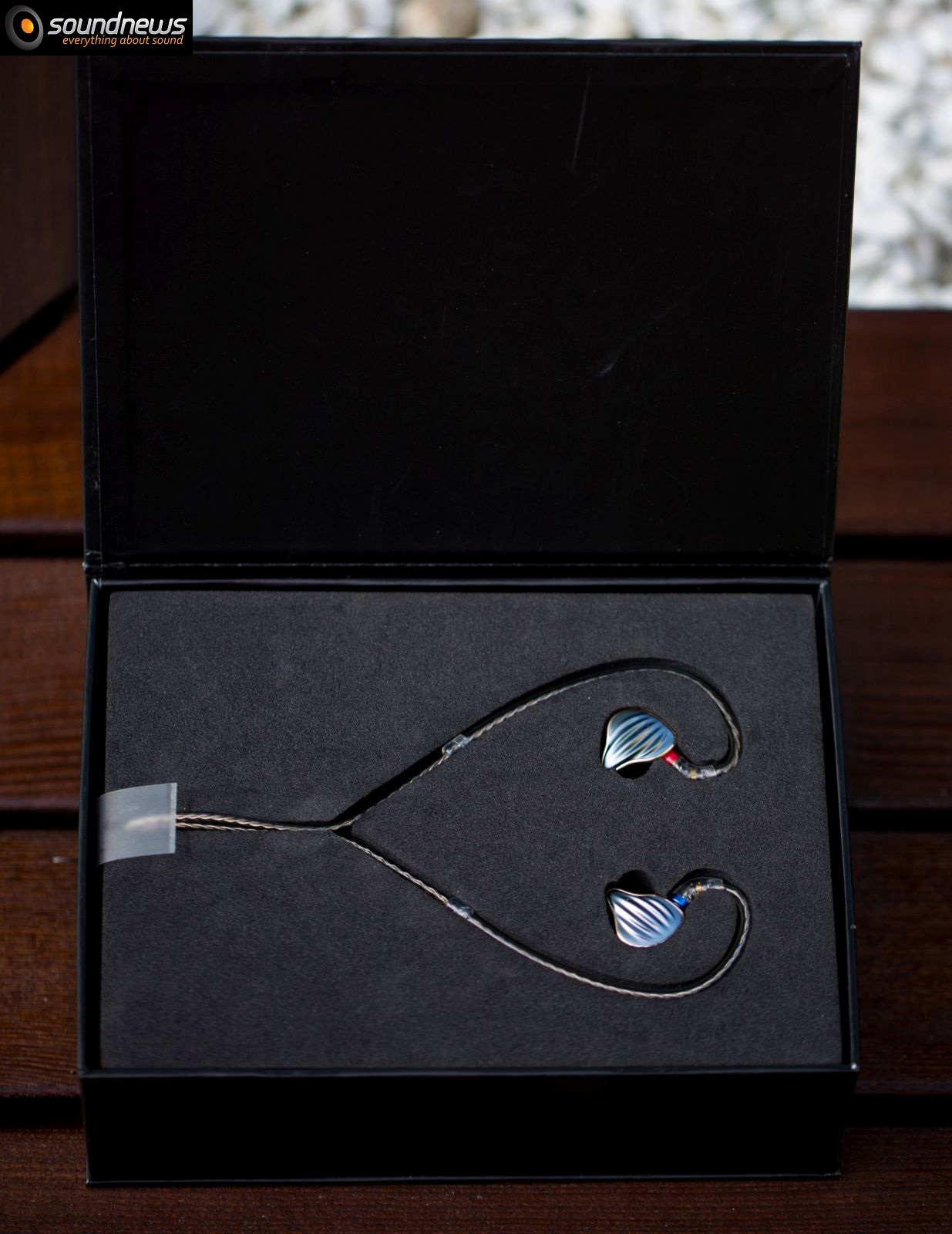 FH5 comes in a nice and quality packaging that actually surprised me a bit; especially the 11 pairs of ear-tips put in a foam sheet that shows exactly how each category of ear-tips will sound, so you no longer need to guess if this enhances the bass, the voices or the treble.

I do prefer the Memory foam ones as they isolate better and sound most neutral to me with just a slight boost in the lows.

In the package can be also found a big transparent waterproof case and a fabric pouch that I use most of the time when I travel because it’s smaller and easier to carry around. 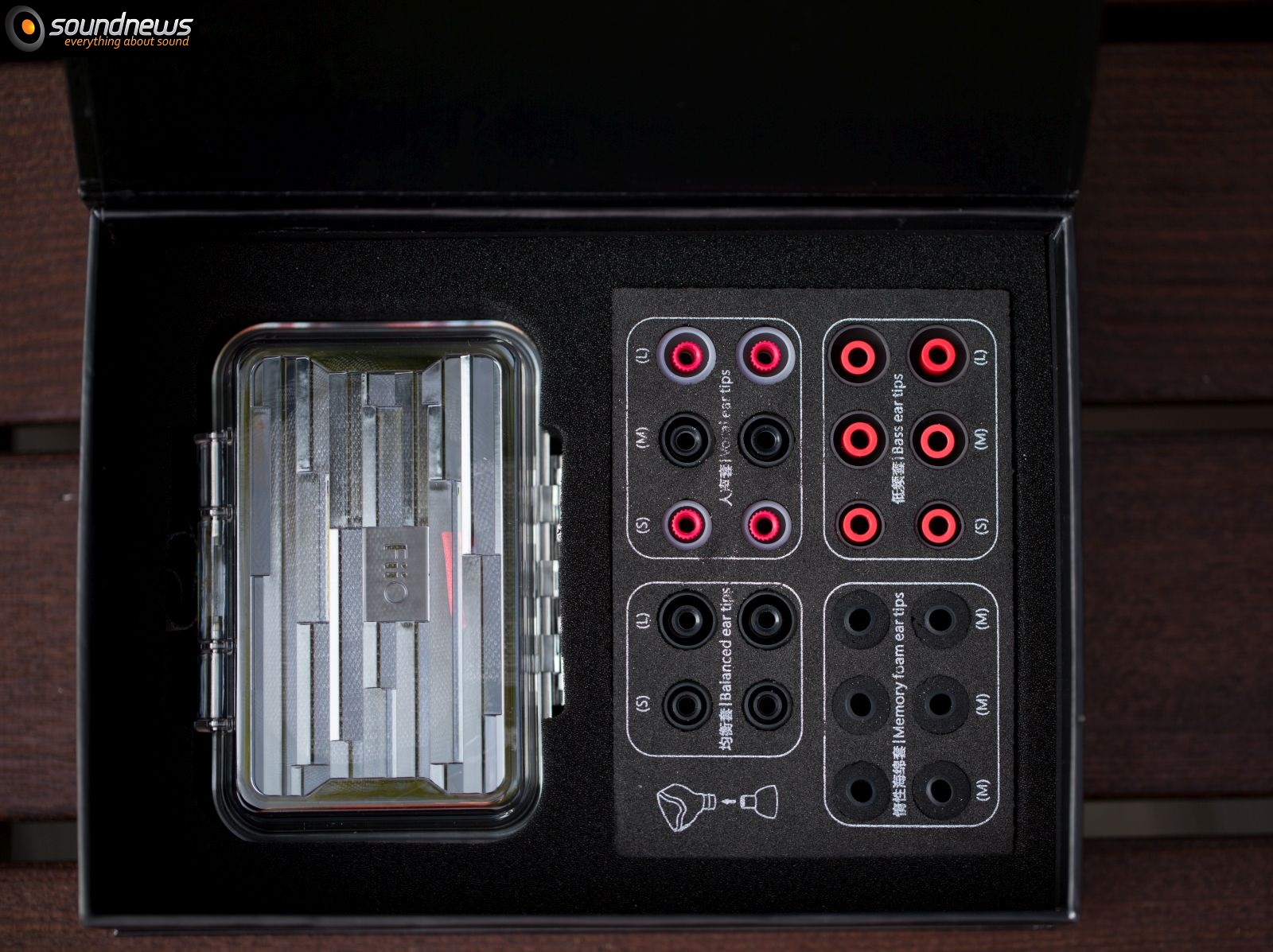 Technology inside the FH5

As with later FiiO IEMs, FH5 is entirely made by the FiiO engineers that many times already showed us that they can create quality in-ear monitors such as F9, F9 PRO and FH1.

FH5 is again a hybrid design that uses 3 balanced armatures to render mids and treble and a powerful dynamic driver to take care of the bass.

Now here’s the catch: the dynamic driver of FH5 has the same size as the FH1 of 10 mm that was notorious for really good bass response. By Comparison F9 series have a 9.2 mm dynamic driver that did well with bass but not great in some situations.

To make bass even deeper and more controlled besides the big 10 mm drivers they also developed what they are calling S.TURBO technology that mimics the work of a dedicated subwoofer with a turbine inspired design that really makes wonders with the bass.

Three bore design (one bore for bass, one for mids and one for treble) is also a novelty for FiiO that is being used in high-end IEMs around the globe. 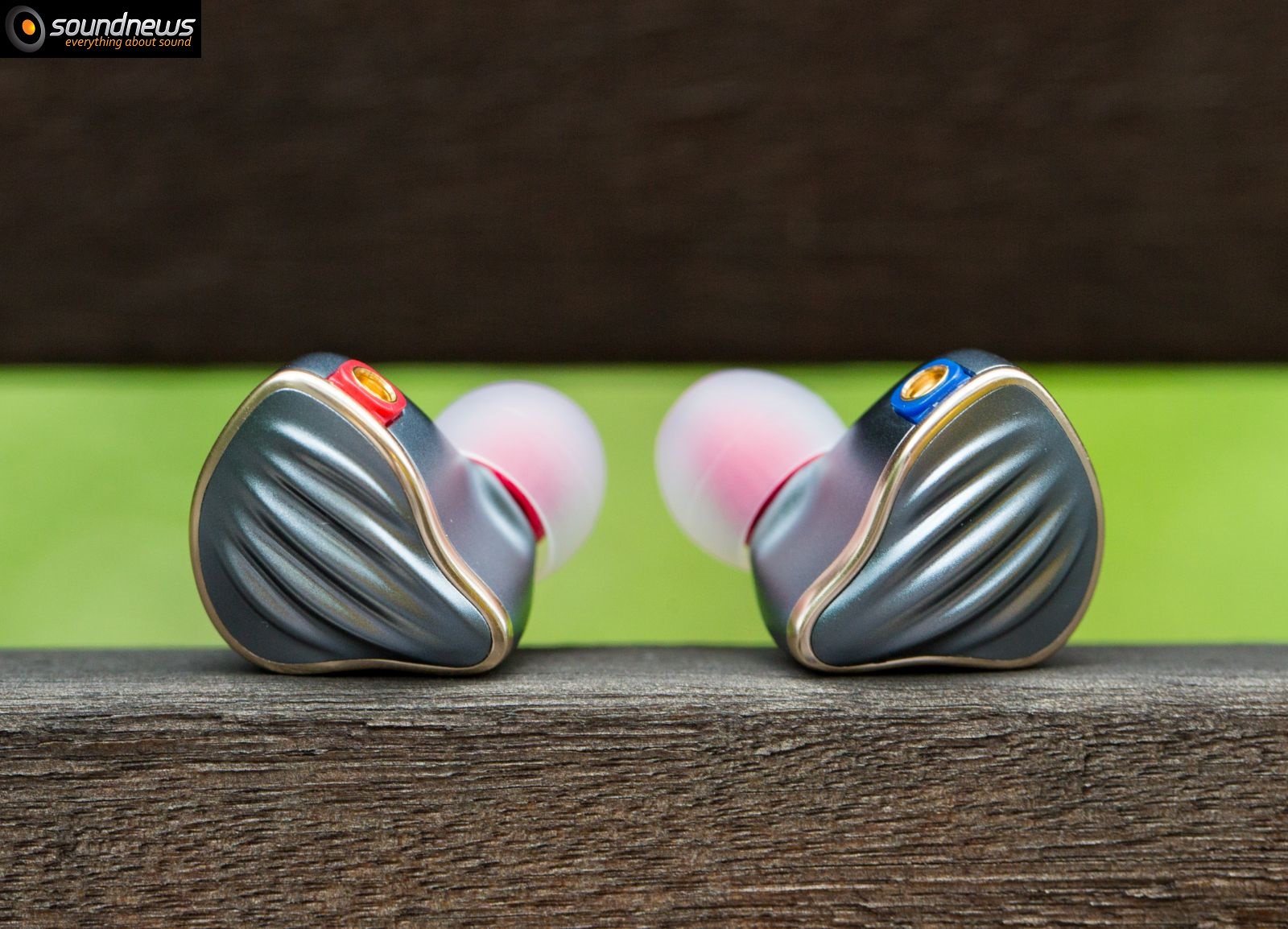 The shell on first appearance seems much bigger to house all those larger balanced armature drivers including a bigger dynamic one and the S.Turbo subwoofer and again resembles a custom IEM somehow. The shell is machined entirely with CNC technology from blocks of aluminum giving them a premium feel to the touch and to the eyes.

The cable that is only one in the package is much sturdier and much more resistant than the one found on the F9 series or on FH1. It’s more rigid; it’s thicker and uses high-purity mono-crystalline silver-plated copper (SPC) wire for higher quality signal transfer that minimizes distortion and signal transmission loss for best sound quality possible.

If you already own a DAP that has a balanced output I highly recommend buying a separate cable such as LC-2.5B (2.5 mm balanced) or the LC-4.4B (4.4 mm balanced) to use it with the FH5, it makes a big positive difference compared to the SE connection. 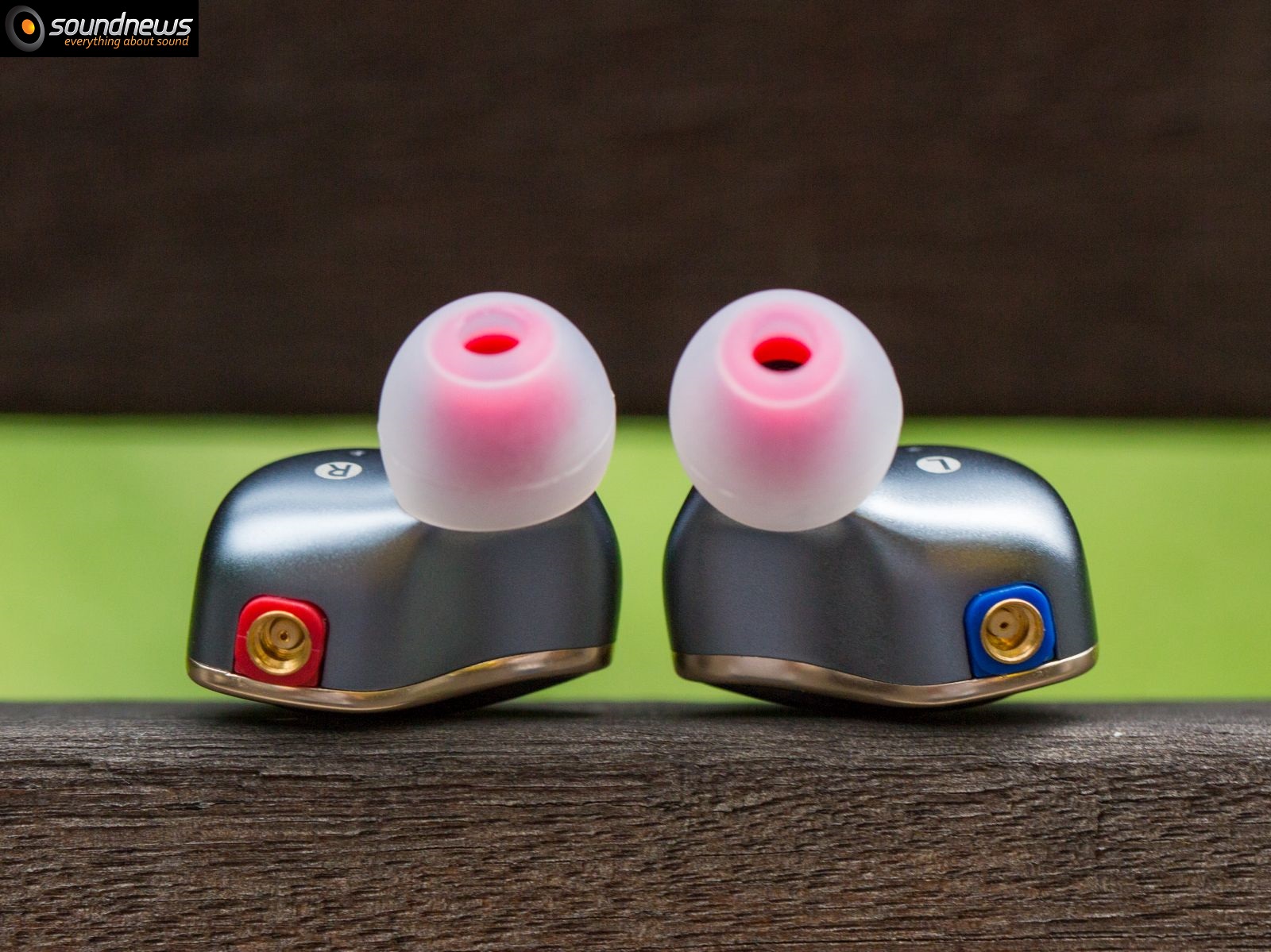 FH5 to this date are the most sensitive IEMs from FiiO, having an impedance of only 19Ω and a whopping sensitivity of 112 dB per 1 mW they can be powered by pretty much everything that has a headphone jack.

However there is another catch: because of their very revealing nature and high sensitivity they are pretty picky of the quality and the noise floor of the source. They can reveal hiss and hum of devices you thought have a crystal clear background. For example they hiss a bit with FiiO’s own X5 MKIII, with Sony NW-WM1Z and they hiss more with a Burson Play and with some other desktop headphone amplifiers, be warned about that.

So my friends, lets get to the most interesting part of the review. 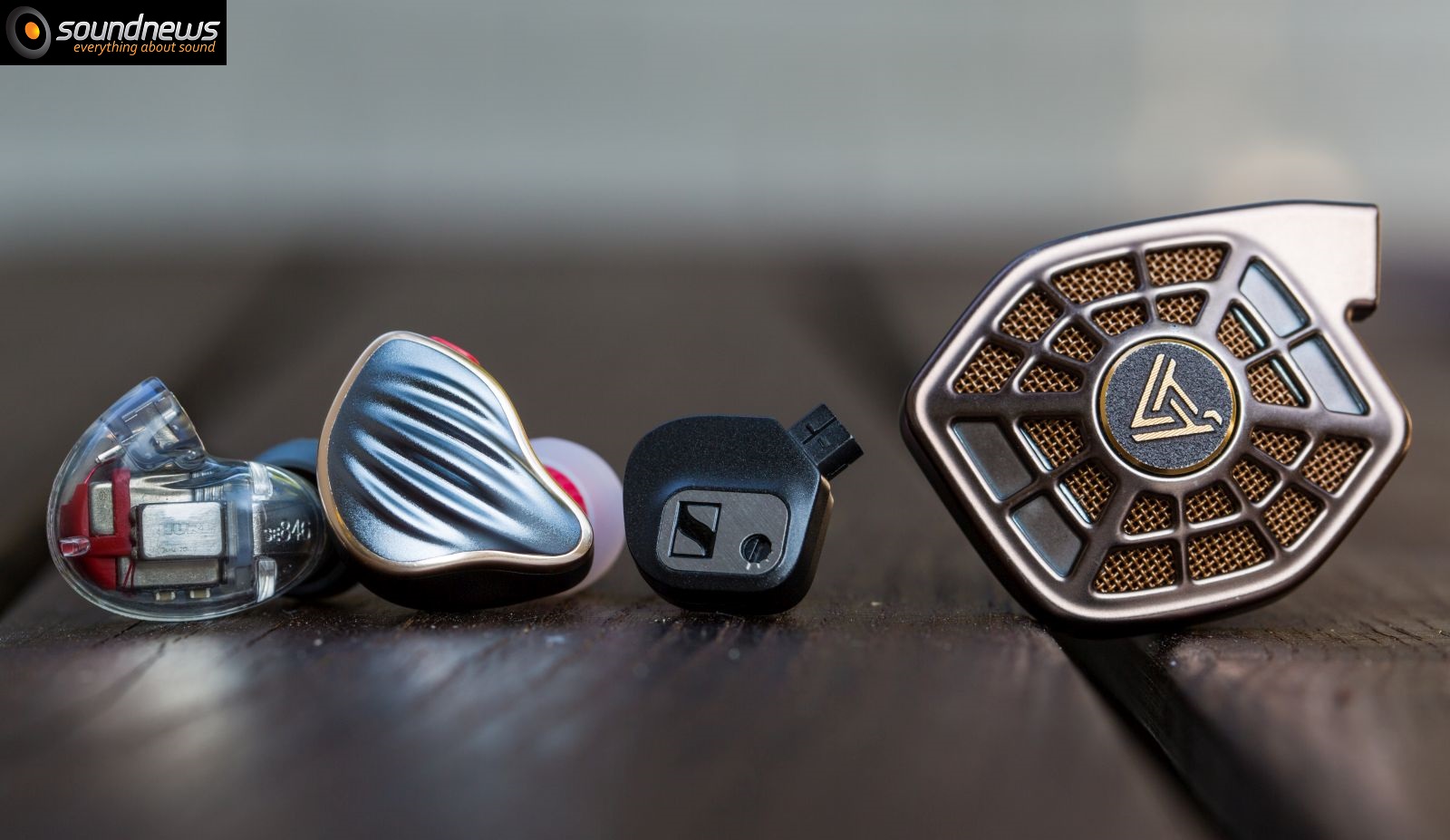 Well, well, I really was expecting this kind of sound quality from FH5 as they blown me away at the first listen. They are by far the best IEM FiiO designed and can easily outmatch higher priced IEMs from other manufacturers.

They have deep and layered bass, great mids with clear and vibrant voices, a good treble extension and a great separation of the notes portraying an out of head presentation due to well spread soundstage. Did I catch your attention already?

I paired FH5 with FiiO’s latest DAP: the M7 that has a very low noise floor and a very black background without traces of noise. M7 also have a very honest and revealing sound so the match was perfect with FH5 and I can easily describe how FH5 are actually sounding.

At 112dB/mW it was an easy task even for the underpowered M7, so volume was never past 50% almost all the time even on demanding classical pieces. The bass response reminded me a bit of F5 and FH1, but this time bass is much more controlled, it goes deep, presenting multiple layers of it and it decays in a natural way, not too fast and not too slow.

The bass turbine really wakes up the bass on higher quality electronica. Daft Punk, Infected Mushroom and The Prodigy was a real treat to listen to.

FH5 have a much higher impact and kick into eardrums compared to F9 series and that makes me quite happy of the overall sound signature.

Lower extremities are not cut this time, for example when listening The Prodigy – Invisible Sun there are few bass notes that makes butterflies in my stomach, a thing that never happened with F9 series.

I do find the bass not only deep but also very controlled due to its fast rises in dynamics.

The upper bass notes seems a bit more pronounced than the sub-bass, its especially heard on groovy jazz tracks where double-bass is present. 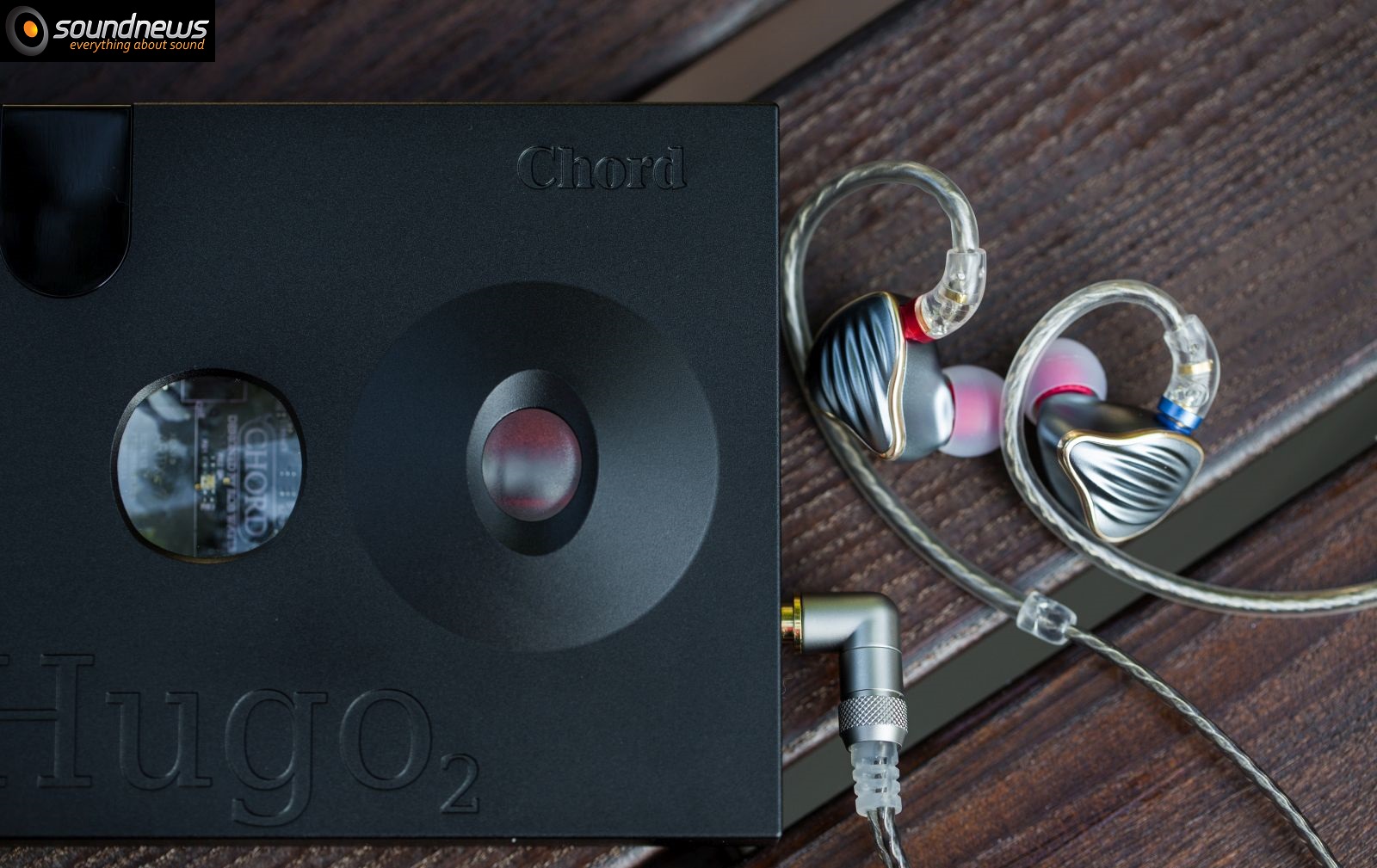 Transition from bass to midrange is done in a natural way so the flow keeps going without stuttering or dips.

Lower midrange sometimes sounds a bit suppressed by the bass notes, but that is the case only on bassier tracks.

Overall the voices are clear and have the right amount of vibration; violins and guitars have the needed zing and pitch. Most of the time they sound full but on rare occasions few voices do sound like they are sitting further away from the listener, bass comes forward more often. Upper midrange in my opinion does not have this problem.

Treble sounds crispy and can bite sometimes, but it’s not bright at all.

Treble is also airy with lots of air between the notes, cymbals and drums never sound crowded, they always sound like two separate entities. 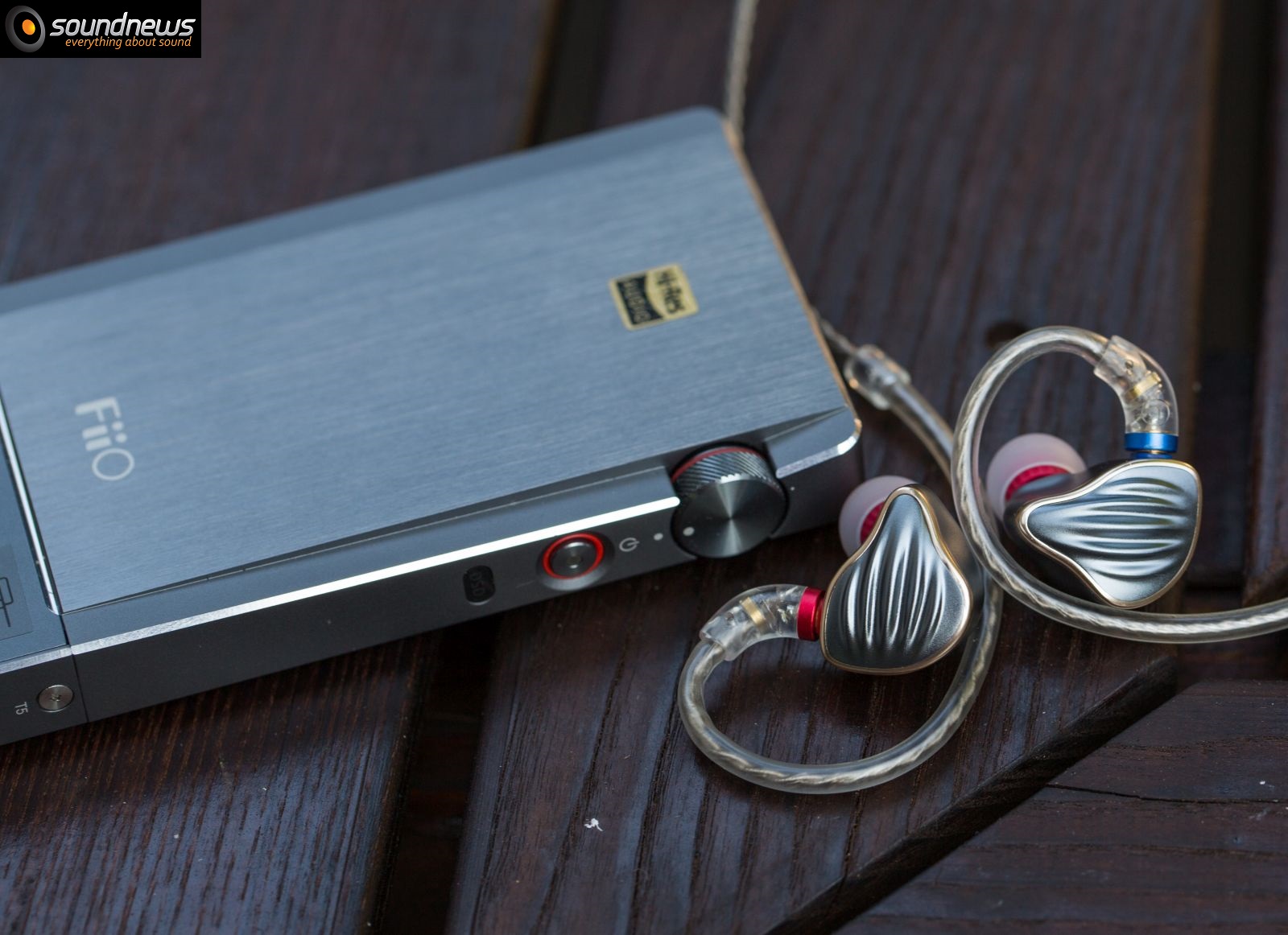 There might be a slight roll off in the upper treble as it always sounds clear and detailed but never fatiguing which I find to be a bit weird, balanced armatures always sounded a bit fake to me due to sharp trebles but it is not the case with FH5.

There is a good tonal balanced across all frequencies and I think FiiO really nailed this time with FH5.

Due to its fast and airy nature, resolution is at a high level, FH5 do sound detailed with a good extraction of small micro-details.

In this respect there is nothing to reproach about FH5. Overall the sound is clean, fast, has good extension, hits hard and lifts your mood, what more can you ask for?

Soundstage is good but not great, sincerely it is quite hard to make an in-ear monitor that sounds wide and spread with drivers that are sitting millimeters away from your eardrums. I find the depth to be better than the soundstage. I can easily look deeper into the mix with FH5 however the width and height of the stage is limited and cannot compete with an open-back design for example.

However for an IEM design it is quite impressive as it is. 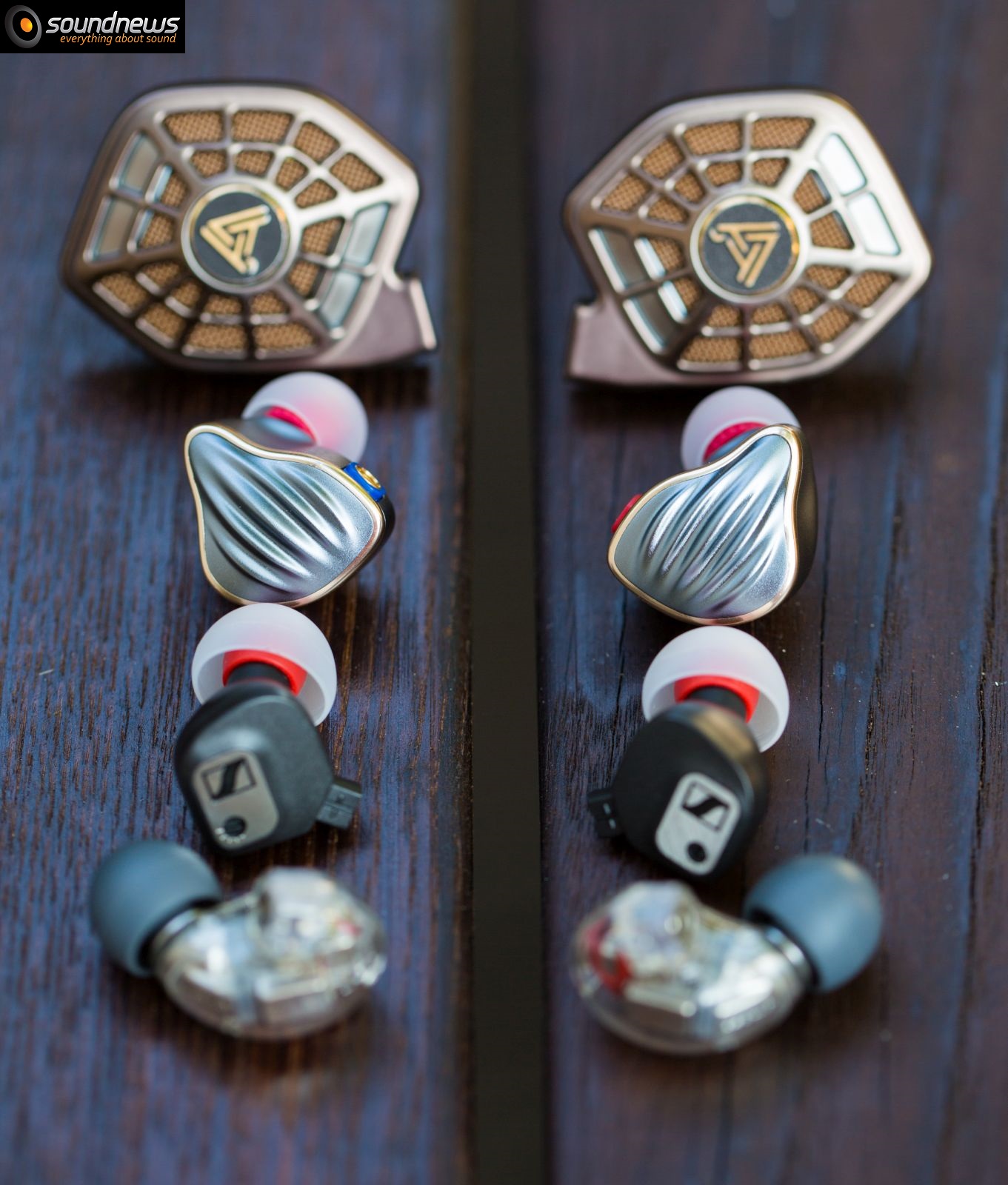 FH5 have a much better tonal balance with better rendition of bass notes and midrange. Vocals sound meatier and sweater on FH5. Bass also goes lower and has more layers of it. FH5 is more natural sounding, less harsh; you could call it a meatier sound.

F9 PRO is better in the upper treble where is doesn’t roll off as fast, however for me it becomes a bit fatiguing after some time. FH5 sounds also deeper, portraying a better depth and I can look easier into the mix. With better-layered bass and more presence into midrange and with a higher micro-details extraction the FH5 overall is a better earphone to me. 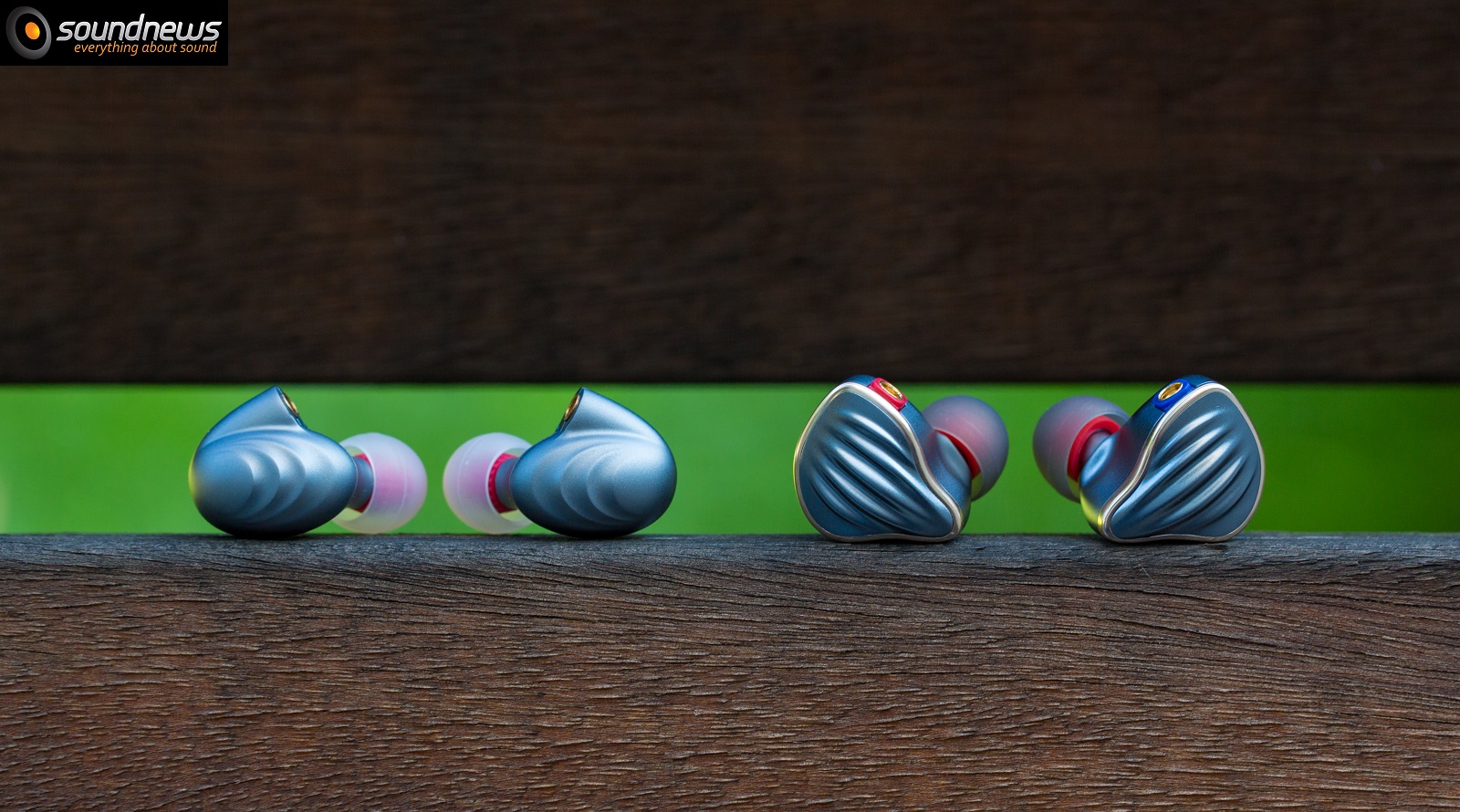 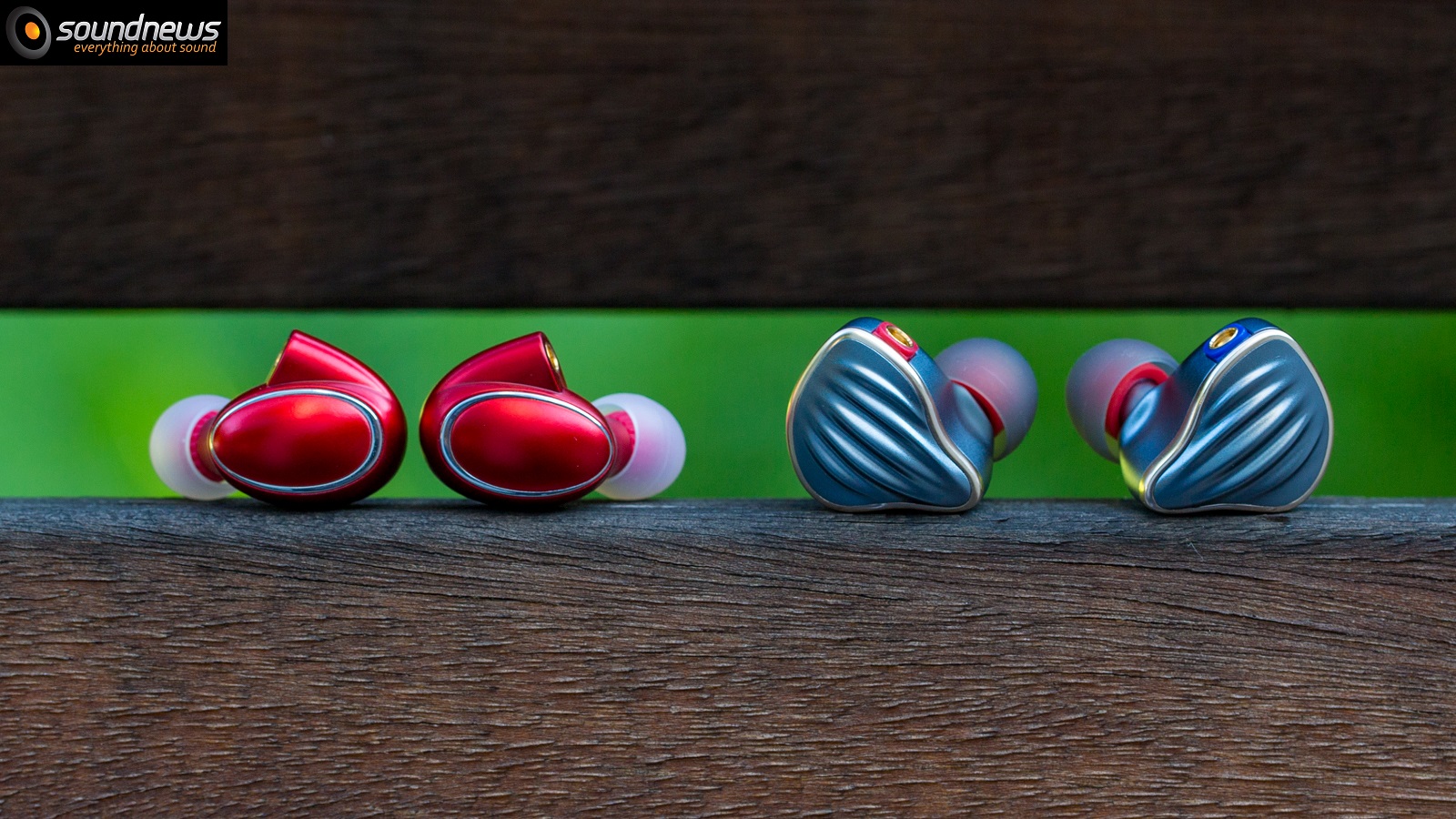 Ok, I know this is not a fair comparison as FH1 is much cheaper. Also four drivers VS two drivers is not fair as well.

However the bass response of FH1 almost stands shoulder to shoulder to the one of FH5. FH5 have a better control over the drivers, bass notes on FH1 are looser and sound one-note sometimes, a thing that never happened on FH5.

The overall sound signature is quite similar, but FH5 has a much better treble response and a more textured midrange. Both sound natural and easy on the ear with no listening fatigue at all.

Due to much faster sound on FH5, every vibration of the notes is decaying faster showing a better texture of every note. FH5 is crystal clear; FH1 is a bit muddy in comparison. There is no denying it, FH5 is completely on another league, a much higher one. 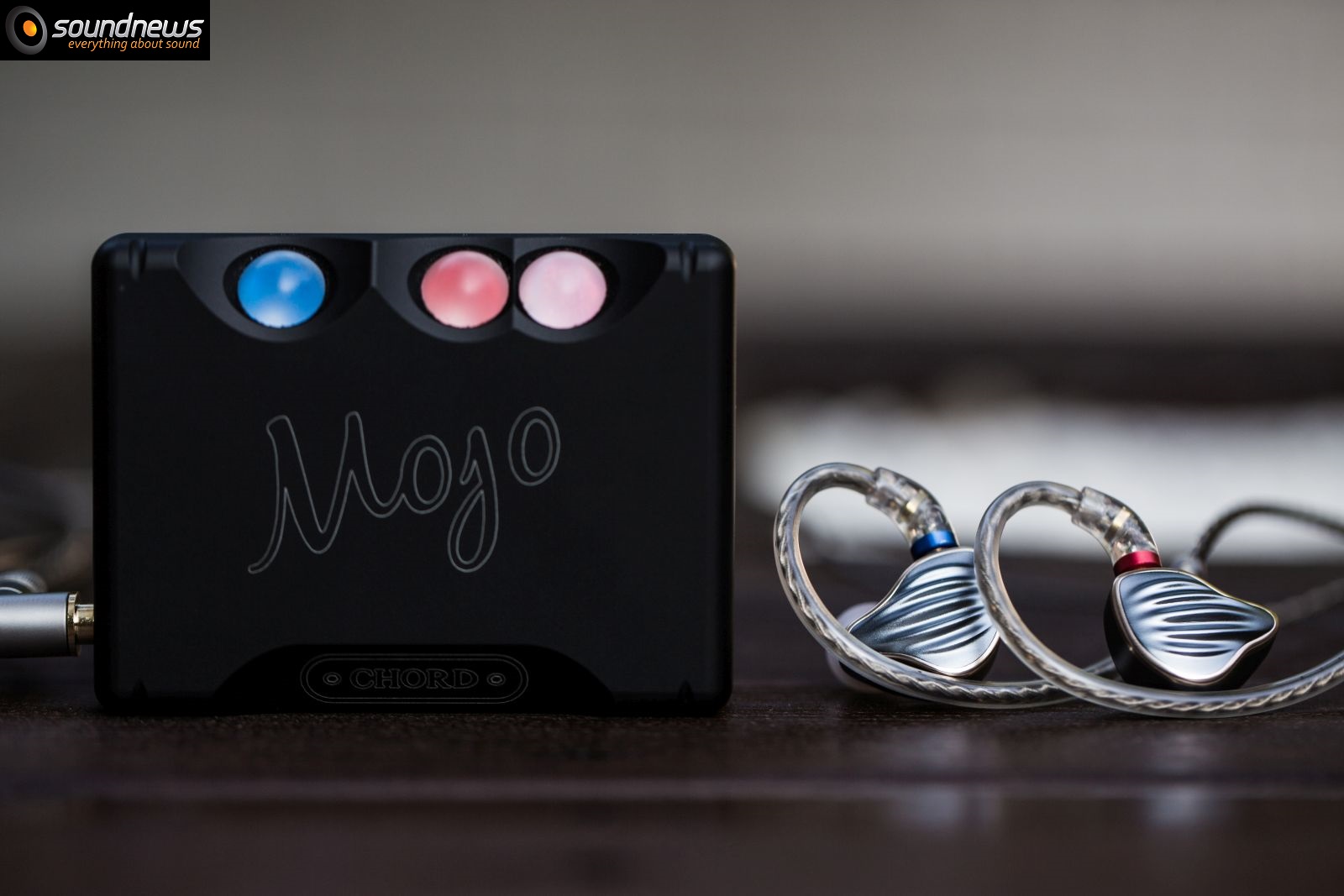 Great packaging, lots of accessories inside, great design, great craftsmanship and most importantly a great sound, all those words represent the FiiO’s FH5.

FH5 again raised the bar not only in FiiO’s portfolio but also in affordable high-end IEM market.

Great sound should not cost a fortune and I thank FiiO for that, this is how it should be done. 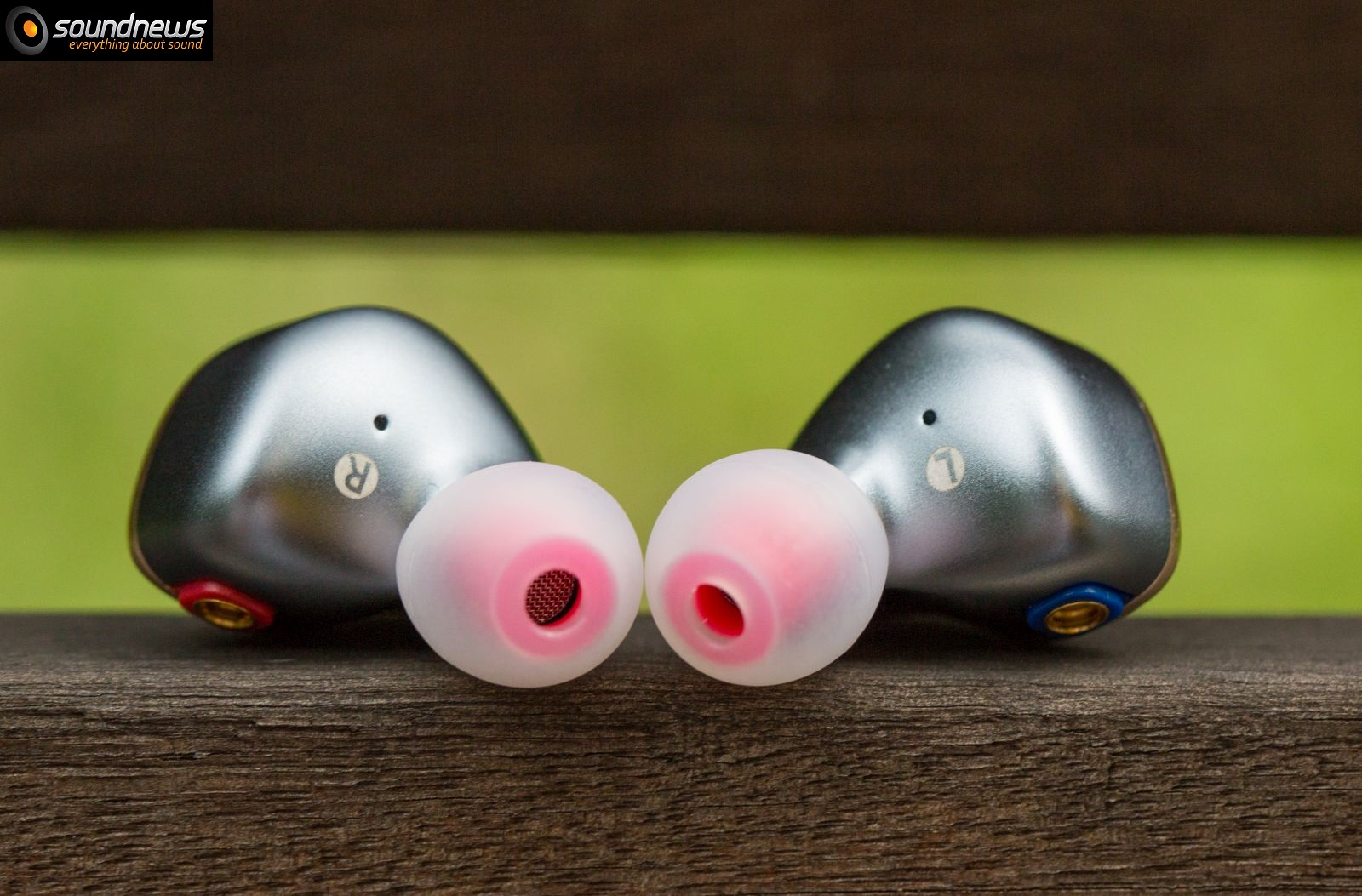 Devastating Fire Shuts Down Entire Production Line for AKM Until 2021